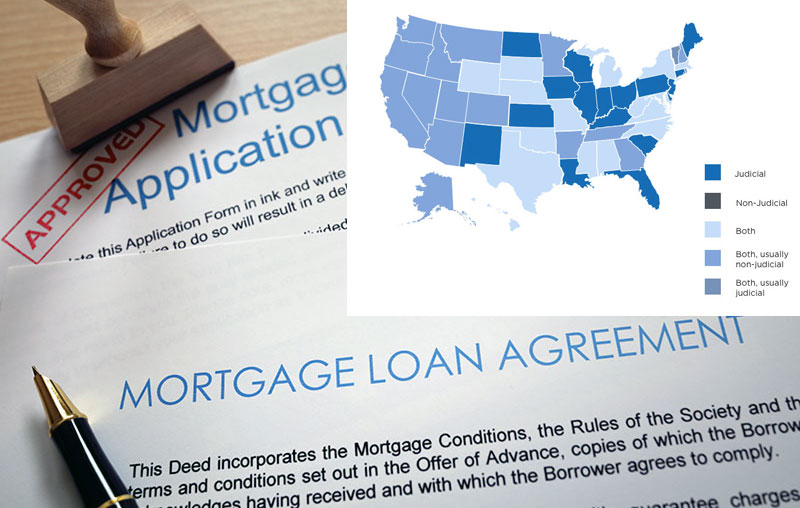 In a Title State, the lender holds title to the property in the name of the borrower through a Deed of Trust. When the loan is completely paid off, the lender issues and records a Deed of Reconveyance in favor of the borrower who then has clear title to the property. The Deed of Reconveyance removes any interests that the lender may have in the property. In title theory or mortgage states title is held in the lender's name until the final payment is made, when title is passed or re-conveyed to the borrower. Basically, this means that when you go to buy a home, your lender will retain title rights to the property and allow you, the borrower, to occupy the residence as if you own it. During a real estate transaction, the seller actually transfers the property to the lender. The lender holds the actual legal title on the property while the borrower will hold equitable title. The lender holds title to the property in the name of the borrower through a document called a Deed of Trust. When a borrower finally pays off their loan in full, a Deed of Reconveyance is issued and the debt is officially extinguished in the public record. If a borrower defaults on their loan, there is no court proceeding to determine if the borrower has any merit to contest the foreclosure. These non-judicial foreclosures are conducted in accordance with procedures established by state statutes, which usually include mailing a default letter to the homeowner and filing a Notice of Default. If the homeowner doesn’t address the default within a state specified time period, a Notice of Trustee Sale will be mailed to the homeowner, posted in public places, recorded in the public record, and published in regional legal publications. After that, the property is put up for auction or a Trustee Sale and sold to the highest bidder. Georgia is a “non-judicial foreclosure” state. That means the lender can foreclose on your home without filing suit or appearing in court before a judge.

In a Lien State, the deed stays with the borrower, and the lender places a lien on the property using the mortgage. The lien is extinguished when the loan is paid off in full. In lien theory states, title to the property is held in the name of the borrower with a security interest or lien to the property being granted to the lender. In lien theory states, the borrower holds the title to the property. Instead of a Deed of Trust, a Mortgage is recorded in the public record and acts as a lien against the property until the debt is paid off. With a mortgage, a homeowner has both legal and equitable title. When the mortgage is paid in full, a release or mortgage satisfaction is filed in the public record to remove the lien. Should a borrower default on a loan in a lien theory state, a judicial foreclosure is required for a lender to take possession of the property. During the 2008 housing crisis, many borrowers in default used a “produce the note” defense in foreclosure proceedings that required lenders to demonstrate they had the legal right and authority to enforce it. The promissory note acts as an official IOU, so if the loan is sold off to another entity, both it and the Mortgage must be properly transferred. While the defense is unlikely to be used successfully today and some states like Florida have addressed the issue with a law requiring the note at the time of the foreclosure, the process gives the homeowners a chance to defend their rights to the property and requires a lender to meticulously track and file the proper paperwork before initiating a foreclosure. A judicial foreclosure usually begins with the filing of a Lis Pendens, which acts as a complaint against the borrower. The borrower is given a notice of complaint by either mail, direct service, or it’s published in newspapers, and he or she will have an opportunity to be heard in court. If the court finds that the debt is valid and in default, it will issue a judgment for the total amount owed, including court fees. Like in title theory states, when a lender is found to have a valid complaint against a borrower, the house is auctioned off. Unlike title theory states, there is an additional step in which the highest bidder is subject to the court’s approval of the sale. Once that’s granted, the highest bidder becomes the new owner of the property.

In intermediary theory states, the borrower retains the title with the express agreement that the lender can take back the title when the borrower defaults on the loan. In addition to lien and title theory, some states have taken an intermediary approach. In these cases, the borrower retains the title, but the lender can take it back without judicial proceedings if the borrower defaults. The Deed of Trust lists the borrower, lender, and a third party called a trustee that holds the title until the loan is fully paid. Typically, the trustee is an escrow or title company. If the borrower defaults on the loan, the lender provides the trustee with proof of delinquency and requests that foreclosure begins. The trustee takes control of the property and sells it on behalf of the lender. Regardless of which state you live in, borrowers everywhere want to avoid foreclosure. While the pandemic has caused concern about many homeowners falling behind on mortgage payments, forbearance programs are available to most to ease the strain. It’s always worth reaching out to your lender or servicer to see what options are on the table.